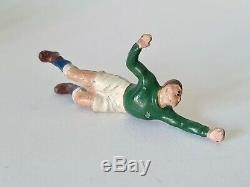 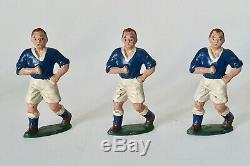 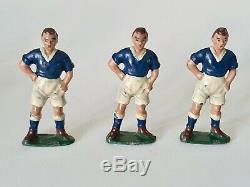 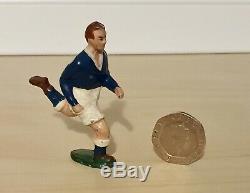 Rare CHELSEA footballers from the small series produced circa 1950/55 by the English Company Timpo Toys in their " My Favourite Team " range. Made in the Hollow Cast Lead method the series contained only a dozen or so of the very Famous Teams that were playing in the 1950's period, these teams were only available for a short time and not many have survived so are now extremely scarce especially in the condition of these players. The figures were hand painted with each of the Clubs chosen in the range painted to resemble the team strips worn in that early 1950's period.

Amongst the dozen or so teams made CHELSEA were included and that team then on the cusp of success did win the 1st Division in 1955. Here we have Ten figures in a CHELSEA1950's era strip, the poses seen here were named in the catalogue at the time as, Running, Standing, Walking and the superb action casting, Goalkeeper Diving. Nowadays they would no doubt be referred to as Goalie, Defenders, Midfielders and Forwards. These are a matching set with the Goalkeeper wearing the same colour Blue socks as the outfield players. Timpo Toys Made In England is moulded into the base of the three forwards.

The condition is overall excellent with the odd chip as seen in the photos. A very nice group of matching colour hollow cast lead figures made 65/70 years ago. With the Current Chelsea team now on the up again, this Rare set would make a great addition to a football collection and must be regarded as fairly unique as these toy footballer teams/figures are seldom seen especially in matching team colours.

Please ask for more information if needed. The item "TIMPO FOOTBALLERS, RARE CHELSEA TEAM, 1950's Hollowcast Lead, Britains Football" is in sale since Friday, January 3, 2020. This item is in the category "Toys & Games\Toy Soldiers\Britains". The seller is "sandmanscave" and is located in crawley.