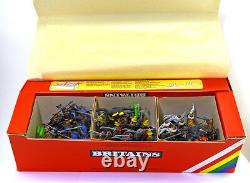 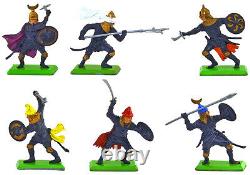 The first, original, version of Britains' Deetail Turks. This range of figures was the successor to the established Herald, Swoppet and Eyes Right figures which Britains had been producing since the 1950s. Although called Turks, these are equally valid as many Eastern Mediterranean Muslim and Byzantine armies of the Middle Ages. This retired set was produced by Britains in the 1970s. It features 48 figures in 6 different poses in pristine, mint condition.

They are packed in their original counter pack box which has never been opened. As we have more than one of these sets, the photographs of the box and figure poses may not precisely match what you will receive, but we guarantee that you will receive a mint, unopened counter pack of the same vintage and condition as the one shown. Here at The Toy Soldier Company we have the world's most extensive stock of pristine vintage Britains Deetail figures and accessories, as well as original Timpo, Atlantic, Airfix and over 100 other makers. We sell over 9,000 different sets of plastic and metal toy soldiers, in scales from 15mm to 70mm, painted and unpainted, plus accessories, books, games and more.

We are an authorized Playmobil dealer with a large stock of vintage MIB sets. The item "48 Britains Deetail Turks on foot 1st version mint in counter pack box 7750" is in sale since Thursday, March 21, 2019. This item is in the category "Toys & Hobbies\Toy Soldiers\1970-Now".