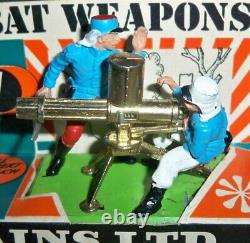 Here we have the Britains Deetail Series from the 1970's and 1980's of the French Foreign Legion Infantry with the Series 7770 Gatling Gun & Crew on its original card with this one being the longer Shop display Card. We have some bits of paint loss on the metal green base, the Gun works but is missing all its Ammo balls!! Backing card is in good condition and longer than normal being the display one for the shop and not as common. Ice Deetail Foreign Legion Gatling Gun!

This item is in the category "Toys & Games\Toy Soldiers\Britains". The seller is "001asterix" and is located in this country: GB.