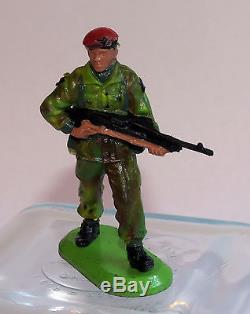 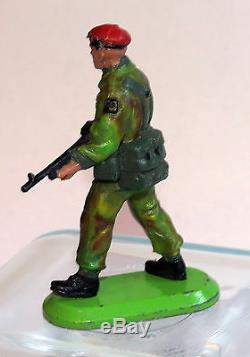 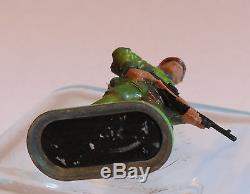 From the Super Deetail Holy Grail set 6314, this is the Britains Super Deetail 1st Issue Paratrooper Walking with Rifle at Waist (reference #932). In 1978 the first set of Super Deetail Paratroopers were showcased at the Earl's Court Toy Trade Fair. The set of six figures also made it on to the back page of the 1978 catalog.

However, due to problems with the production of these figures, they were deleted straight away and only a very small amount made it into the public's hands. The Super Deetail set of Paratroopers is the only ever set to be advertised in a catalog and then never put into full production. It is estimated that less than a thousand were ever produced, In 1980 production was simplified and the more common set of four was released.

The early 1978 figures had a more colorful, lighter base color. As well as having dark green webbing their boot putties were also dark green (the later ones just had plain black boots). And in addition to their black weapons, their buttons were black along with rank badges, DZ patches, beret cap badge, they even had a black band to the base of their berets. This one is in excellent condition, with minor wear to his green metal base.

A very rare find for the serious collector. The item "Rare Britains Super Deetail Paratroopers 1978 pose from Holy Grail Set 6314" is in sale since Monday, August 28, 2017. This item is in the category "Toys & Hobbies\Toy Soldiers\1970-Now". The seller is "poolguyh2o" and is located in Greensboro, North Carolina.